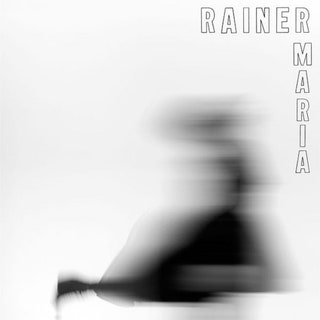 After having taken a ten-year “hiatus”, Rainer Maria is rested, tested & ready for action. As I write this review (which, I know, is a little late, forgive me) I am listening to S/T so am able to easily refer to what it is about which I’m writing. The title of their latest album, S/T is a sort of “statement”, in a way; one of those self-aware things that you see being used by more and more “people who know” and they “know you know”, therefore, “know you know they know”, and so on. So, instead of just entitling their “reunion” album Rainer Maria (which many reviewers, commentators, even people talking to other people, having a conversation in which the subject of music, in general comes up; maybe the subject is, from the beginning, about indie rock; maybe such a theme would, for certain people, go without saying (that it would be anathema for them to speak of anything else). So, they’re talking about new things that are swirling about and one guy says to the woman to whom he’s speaking “have you heard that new Rainer Maria album?” to which the woman might answer: “Rainer Maria? I thought they broke up 10 years ago!” “No – see that turned out to just be a ‘hiatus’. The pressures of it all got to them and it was either do this or keep going at a heavy pace until things just snap, such as in the case in way you have to finally let go of a dying man who’s been dying in a hospital bed for weeks, with, so far, several “code blues”, where a team of medical pros have to rush to the room with their “crash cart” in order to, using a defibrillator, shock the patient until the heart monitor hooked up to him goes from a flat line to one that shows signs of a heartbeat. But, there will come a day, how soon, no one can be sure, when that heart will stop again and that time will be “The End”. No matter how many times you shock him trying to restart the heart, but in vain. Finally, after three or four shocks, someone has to stop this futile work and call the time of death, which culminates in much sobbing and screaming from the wife (or husband, depending…)”. Such was the case here. Maybe I’m overstating it a bit, dramatizing aspects of it. The happy part, though, is, Rainer Maria was smart enough to recognize the stress they were under and that something had to give, if at least temporarily. So, instead of breaking up for good (which, I bet, many thought they had, given this was a 10-year hiatus), they took a long, deserved break. During this time singer Caithlin de Marrais released a couple of solo albums, projects on which she explored her unique songwriting talents and experimented with sounds and styles. In 2008, guitarist Kaia Fischer released a solo album, but, feeling that wasn’t enough, she walked a separate path: devoting her life to Buddhism. What about William Kuehn? What did he do? Well, the drummer found some gigs, playing drums in various capacities all over the world. So, it was not an uneventful 10 years. They all did things they had wanted to or soon realized they wanted to do.

Eventually it was time for them to get back together – or at least take those tentative steps and see which way the wind was blowing.

Still recording for Chicago-based Polyvinyl Records, Rainer Maria set out to do something new. S/T is the outcome. There are some great instances of growth and a forward-looking outlook that shines through quite well. With songs like the current fave, “Suicides and Lazy Eyes”, “Blackbird”, on which De Marrais sings in a breathy, almost lethargic, but not apathetic sultry voice and which gets a burst of flame from guitarist Kaia Fischer after which Kuehn beats some sense into the tune. I would be lying if I didn’t say that “Blackbird” is a song that really grabbed me and stuck! Another notable song I want to mention here is the song right after “Blackbird”, “Possession”, whose intensity is a great accompaniment to its subject. But, there’s also the longer “Ornaments of Empty”, which has a flashy melancholic as well as infectious groove to it.

All in all, S/T is so much more than a mere “comeback album”. That’s just a metaphor for a record by a band who fell out of relevance do to their own neglect and who are now trying hard to win back respect and sales by the still-faithful fan base as well as pick up any new, younger fans they can hook along the way. Well, the latter part of that statement might hold in the case of S/T but they have not neglected their true fans or anything else, for that matter. They just needed some time to experience life on its own terms and for the various members to be free to follow their own muses. In fact, for those who are familiar with Rainer Maria from back in the day, S/T sounds like they haven’t been MIA at all for these years with the one exception that – hey, let’s face it: time, unfortunately, hasn’t stayed still for the last decade and the members of Rainer Maria are all, pretty much in their 40s now. They’re not the young bucks (or does & buck, rather) they once were. But, that really can be a double-edged sword. The sharp part of that is that they have managed to put out a brilliant album which is no doubt Rainer Maria in the fullest sense. But, the dull part of that “double-edge” is that, well, 10 years have passed.

Anyway, don’t just take my word for it – get over to https://www.polyvinylrecords.com and check out the Rainer Maria section, then take a listen to whatever they have set up for possible customers to listen to and you’ll see. In fact, you might just end up, right there, on the spot, purchasing the album! (Tell ’em Kent sent you!)

OK, well, let’s hope that Rainer Maria can keep up the great songwriting and keep that beautiful chemistry that works so charmingly together for the foreseeable future. I really would like to see more and more stuff coming from this indie giant. -KM.

This site uses Akismet to reduce spam. Learn how your comment data is processed.

Keeping abreast of the better indie releases as they come out.